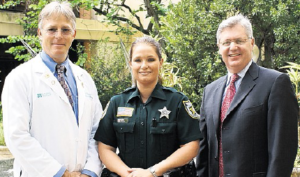 Stephanie Barge, 27, is a deputy with the Palm Beach Sheriff’s Department — and a carrier of the breast-cancer gene. She recently had a mastectomy and reconstruction to dramatically reduce her risk of developing breast cancer. Without the surgery, her odds of getting breast cancer were up to 85 percent, according to Dr. John A.P. Rimmer of Jupiter Medical Center.

Stephanie’s mother, diagnosed with breast cancer a year ago, is currently in treatment for a second bout with the disease. The young woman said the decision to have the surgery didn’t take much thought, knowing she “had an opportunity to dodge the bullet” and to have the immediate reconstruction. She now wants to get the word out to other women facing the decision.

Stephanie is one of more than 30 young patients in the past two years who have trusted Dr. Rimmer to perform their surgeries at Jupiter Medical Center. From what it looks like today, I couldn’t ask for better results,” Stephanie said a month after her surgery. She is now scheduling laparoscopic surgery to have her ovaries and tubes removed as well since the BRCA gene also points to a higher risk for ovarian cancer.

A study published Sept. 1 in the Journal of the American Medical Association (JAMA) found that women like Barge with inherited mutations of the BRCA1 or BRCA2 genes who had prophylactic mastectomy or removal of the ovaries and fallopian tubes had a decreased risk of developing breast cancer and ovarian cancer, as well as lower mortality risk.