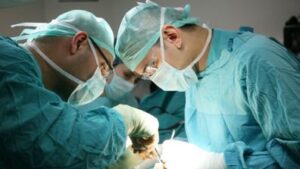 As more Americans opt to work and stay active even after reaching the age of 65, we see an increase in the number of older patients who go under the knife to enhance their looks. Ms. Mary Lou Ray, a real-estate agent in Roanoke, Va, reportedly spent $13,000 on a face lift and other rejuvenating cosmetic procedures last year to keep up with her younger counterparts.

There are no age limits when it comes to cosmetic procedures but older patients are exposed to higher risk of complications than their younger counterparts. Studies show that risk of complications associated with general anesthesia during invasive cosmetic procedures such as tummy tuck, lower body lift, liposuction and other major body sculpting procedures are higher among older patients. As it is, older people who want to go under the knife to look younger and stay more competitive should take extra care in choosing their physicians. Ms. Diane Foia, a retired college English professor in Seattle, did not take any chances. She made it a point to have a board certified physician to perform her facelift and necklift procedures.

If you are one of those people who wants to look good and stay active after the age of 65, call or email us now. Talk to our board certified cosmetic surgeons. They are always ready to help you decide which procedures are best for you.

Plastic Surgery Is on the Rise Among Older Americans

Mary Lou Ray decided at age 65 that she had seen enough of the person in her mirror.

“My life led up to this. I had been divorced for 13 years, my children were grown, and with the death of my mother—not to be unkind—I was finally free of criticism about things like dyeing my hair,” she says.

So last year she spent $13,000 on a face lift and other cosmetic procedures that proved rejuvenating.

“I’m absolutely thrilled,” says Ms. Ray, a real-estate agent in Roanoke, Va. “I think a lot of friends in my age bracket would like to try this, but they’re afraid of getting that unnatural, yanked-up look. I don’t have that; I still look like me.”

Ms. Ray is part of the changing national profile of the typical first-time plastic-surgery candidate—a demographic group that’s well past its first few sags and wrinkles. Elective cosmetic procedures among patients age 65 and older, both surgical and nonsurgical, rose 29 percent from 2005 to 2010, to more than 680,000, according to the American Society for Aesthetic Plastic Surgery. During that same period, cosmetic procedures among the overall population fell 17 percent.

In part, doctors say, the change reflects the fact that many Americans are working longer than they anticipated, because of depleted nest eggs, and believe that physical enhancements will make them more competitive with younger co-workers. Other patients simply “have the attitude: ‘With people living longer, I want to do everything I can to enjoy the years I have left,’ ” says David Sarwer, associate professor of psychology at the University of Pennsylvania, who researches cosmetic procedures at the school’s Center for Human Appearance.

Whatever the motivation, physicians say older patients should approach cosmetic surgery with greater-than-normal caution. Rates of healing, reactions to anesthesia, the potential for complications—all can be different, and perhaps more problematic, for those age 60-plus.

Most patients, including older ones, choose procedures that are less invasive and expensive than face lifts or other surgery. In 2010, nonsurgical techniques, led by injections of Botox and other wrinkle-smoothing substances, accounted for 88% of the cosmetic procedures performed on patients age 65 and older, according to the American Society for Aesthetic Plastic Surgery.

The costs and lasting effects of treatments vary considerably. Injections average about $400 and may help for a few months; a face lift can easily run close to $7,000 and last several years.

Enrique Silberblatt, who performed Ms. Ray’s face lift, says some people working into their 60s worry they don’t look as alert as younger colleagues: “They say, ‘I look tired.’ ” Some retirees say they want to look refreshed to begin second careers, says Malcolm Roth, chief of the division of plastic surgery at the Albany Medical Center in New York state. “Or maybe they’re starting over in a new location, moving near their kids and grandchildren.”

Of course, plastic surgeons, says Prof. Sarwer, can’t guarantee satisfaction for patients who yearn for what he calls “secondary benefits, such as, ‘I’m recently widowed and want to get back into the dating scene.’ ”

Plastic surgeons say candidates of any age for cosmetic procedures, but especially older ones, should consult not only their family doctor but more than one specialist about their appearance goals and other issues, such as the condition of their skin and its potential for relatively quick healing.

“You have to do your research to do this right,” says Diane Foia, a retired college English professor in Seattle. She interviewed four specialists before settling on Phil Haeck, whose credentials include a recent stint as president of the American Society of Plastic Surgeons.

In March 2010, at 63, Mrs. Foia underwent her first face lift—a $10,000 gift from her husband, who called the gesture a “retirement gift” to both of them. She wasn’t insulted at the idea. “Looking at myself in pictures, I had noted that it was starting to look like my chin area had dropped,” she says.

Dr. Haeck’s preoperative counseling prepared her to be under general anesthesia for four hours and included a complete briefing on “what the doctor was about to do to my face.”

The procedure involved discreet incisions in Mrs. Foia’s face and neck that allowed Dr. Haeck to pull and tighten her skin. Although she didn’t experience complications, she prepared for normal postsurgical limitations: She had to sleep sitting up and postpone showers for two days.

There was some pain and bruising, but she felt good enough to reject a prescription for the discomfort. Still, she recalls “some sensitivity” around her ears and on her neck that lasted about six months.

It’s particularly important for prospective patients to ask if any procedure requires local or general anesthesia or if there is a choice, and what the risks and aftereffects are for any type of anesthesia.

The risk of general anesthesia is higher for older patients, says Sheila Barnett, a geriatric anesthesiologist and associate professor at Harvard Medical School. The potential complications include postsurgical delirium, which causes some patients to become confused and disoriented for days. There have also been cases of postoperative cognitive dysfunction—long-term problems with loss of memory, learning and the ability to concentrate.

Comprehensive statistics on older adults and anesthesia complications aren’t available. But anecdotal evidence, says Dr. Barnett, indicates “anesthesia is probably safer than it has ever been” for older patients, thanks to preoperative examinations for potentially complicating conditions such as hypertension.

Cosmetic procedures are rarely covered by health-insurance plans, except for cases such as some eyelid reduction, which is considered necessary for aiding vision. “What many plastic-surgery patients don’t realize is that operative-related complications aren’t covered either” by their primary insurance policies, says Jason Angus, president of Venture Specialty Insurance LLC, a Richmond, Va., company that specializes in insurance against such risks. Insurers say the prices of such policies usually aren’t higher for older patients. They typically cost about $150 and are readily available.

Having Fun With It

Some older adults encounter cultural complications. These can come before surgery in the form of concerns from family members, especially grown offspring. “My two sons were worried,” says Mrs. Foia. “They asked, ‘Are you going to come back looking like yourself?’ ”

But afterward her sons were pleased, she says. “There was kind of a ‘Wow’ factor. Their reaction was that I looked well rested, like I had a vacation.”

Ms. Ray’s results included a smoothing out of her face so dramatic that airport security agents have doubted she’s the person pictured on her driver’s license. “I’ve had more fun with this,” she says. “I get people who run into me and say, ‘There’s something different about you, but I don’t know what.’ I say, ‘Well, a face lift helps.’ ”

Of course, time will eventually undermine the benefits of any cosmetic procedure, and Ms. Ray says she’s prepared for more facial surgery in a few years. “When this starts to sag, I’ll do it again.”