Skip to main content
Home/Blog / Breast Reduction and Liposuction: More Nip and Tuck For the Guys

Breast Reduction and Liposuction: More Nip and Tuck For the Guys

If you think that only women are concerned about their boobs, think again. According to the American Society of Plastic Surgeons (ASPS), the number of breast reduction procedures performed on men has steadily increased in the past two years. In 2010, the number of men who had surgery to reduce the size of their “man boobs” increased by 6 percent. The ASPS noted that older men who want to look their best and gain an edge in the highly competitive job market make up a large percentage of male breast reduction statistics. 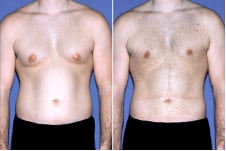 The fact that fashionable clothes tend to show off the male figure influences affluent baby boomers to go under the knife and do something about their portly figures. Note that the more relax fashion trend does not allow men to hide their bulges under layers of clothes so many of the aging baby boomers are now forced to diet and exercise to trim down their figure. However, not all areas of the body respond to exercise and dieting so the best way to get rid of the excess fats in these areas is through cosmetic procedures.