Keeping You and Your Skin Out of Harm’s Way 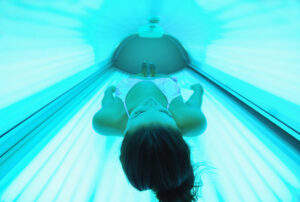 The Texas legislature recently clamped down on minors using tanning beds with a strict new law. The law, which took effect September 1, removed the exception for minors with parental consent to tan and now bans youths under 18 from using tanning beds altogether. Texas joins ten other states in prohibiting tanning bed use among minors; only 11 states have no tanning bed regulations.

Dr. Jeffrey Gershenwald, medical director of the Melanoma and Skin Cancer Center at the MD Anderson Cancer Center in Houston, supports the measure. “There is clear evidence that using a tanning bed increases the risk for melanoma,” he said, adding that evidence suggests the risk increases by 85% in people who used tanning beds before age 18. The risks associated with tanning beds are so widely accepted that in 2009, the World Health Organization took the step of classifying the beds as carcinogens, indicating a direct link to cancer.

The American Cancer Society statistics demonstrate that melanoma rates have been steadily rising over the past 30 years; this year, they estimate nearly 80,000 new melanomas will be diagnosed and approximately 10,000 will die of the disease. Dr. Gershenwald says part of the challenge in treating melanoma is that it is often without symptoms. “It’s not something one would necessarily feel pain from or other kinds of symptoms other than a change in a mole,” he said.

Minimizing the risk of melanoma involves more than avoiding tanning beds, however. The American Cancer Society recommends wearing a brimmed hat, sunscreen and sunglasses to protect your face and scalp from harmful UV rays; they also suggest using self-tanning lotions to get a healthy glow instead of exposing skin to too much sun.

Aside from the risk of melanoma, overexposure to sunlight can also cause unsightly blemishes, skin damage and wrinkles and accelerate the signs of aging. Fortunately, there are many non- and minimally invasive procedures available to help reverse sun damage to the skin. Treatments such as microdermabrasion, chemical peels and laser resurfacing can reduce the appearance of sunspots and fine wrinkles and even out skin tone. Dermal fillers like Juvederm and Restylane can be used to treat deeper wrinkling and reduce the aging effects of sun damage. Dr. Pinsky can recommend the best treatment or combination of procedures to best reverse sun damage to the skin.